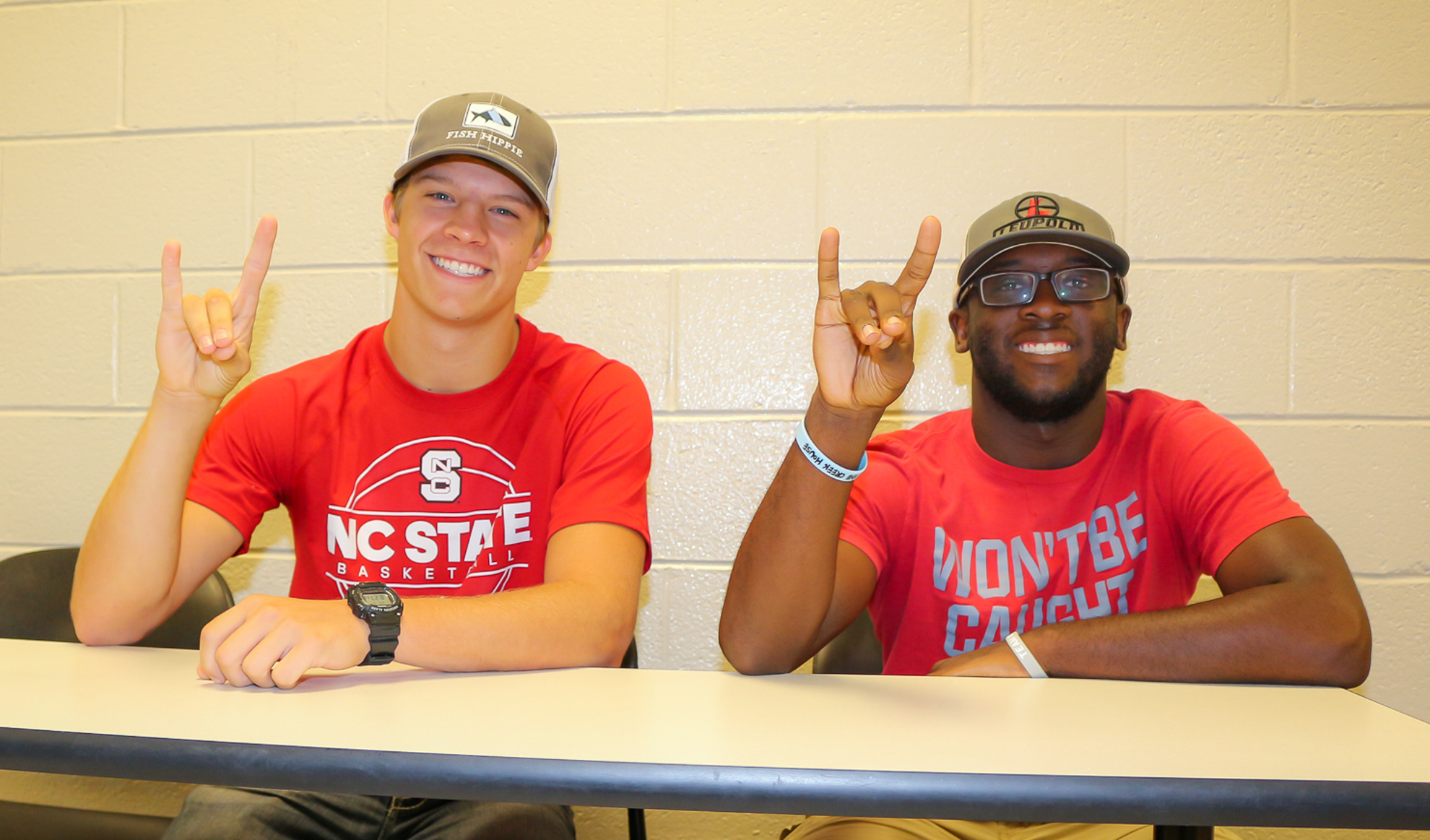 Johannes Van Essendelft (left) and Memphis Slade-Credle will head off to NC State this fall. The two BCCC students both appreciated the transition the college provided between high school and a large university.

As next step in PackTrac, BCCC students headed to NC State for agriculture

Two students will head to N.C. State University this fall to complete a bachelor’s degree that they started at Beaufort County Community College. Memphis Slade-Credle and Johannes Van Essendelft are part of PackTrac, a pathway where agriculture students spend the first two years of their four-year degree at BCCC. Beaufort was the first community college in the state to enter into the program in 2017.

PackTrac puts students on course for bachelor’s degrees in any of 13 majors through the College of Agriculture and Life Sciences at NC State. Both students have chosen agribusiness management, a versatile degree that gives them flexibility after finishing at NC State. Other degrees that students can pursue include animal science, horticultural science and plant biology. PackTrac clearly defines all of the classes and requirements the students will need to transfer. It also sets up advisors on both sides to help with the transition.

Johannes Van Essendelft graduated from Terra Ciea Christian School, where he was one of only six students in his senior class. “I liked the idea of having smaller classes so I can have a more face-to-face experience with my teachers,” he said. “The transition is much easier from high school to a community college instead of going straight to a university. It allows you to get a feel for college classes and university life. I am a bit of a home body, and going to BCCC still allowed me to work, live at home, and be around my friends and family for a little longer.”

Memphis Slade-Credle also wanted a transition between high school and a larger university. “To be honest, I wasn’t quite ready to leave home just yet,” he said. Slade-Credle was already taking classes at BCCC while he was in high school, so it made sense for him to finish out his associate’s degree at the college. He plans to work with a company like Nutrien after finishing his bachelor’s degree.

Van Essendelft had to pay for his own tuition, so starting out at community college cut his bill by more than half. “Starting at BCCC was one of the best decisions I have ever made,” he said. While he is still figuring out his career options, he knew from the beginning that he wanted a bachelor’s degree and PackTrac guaranteed that all his BCCC credits transferred to NC State.

The students are ready for their time at NC State. “I’m really looking forward to the change of scenery and a whole different perspective,” said Slade-Credle. “I’m a country kid so living in the city will be a different experience that I’m ready for, too.”

“I am looking forward to another chapter in my life, said Van Essendelft. “You only do college once so I want to make the most out of it and have a great time while learning.”

As they head to Raleigh in the fall, PackTrac has let these two students stay rooted a little longer before heading off to one of the best universities for agriculture in the country.

For more information about the PackTrac program, contact Lisa Hill at 252-940-6223 or lisa.hill@beaufortccc.edu.