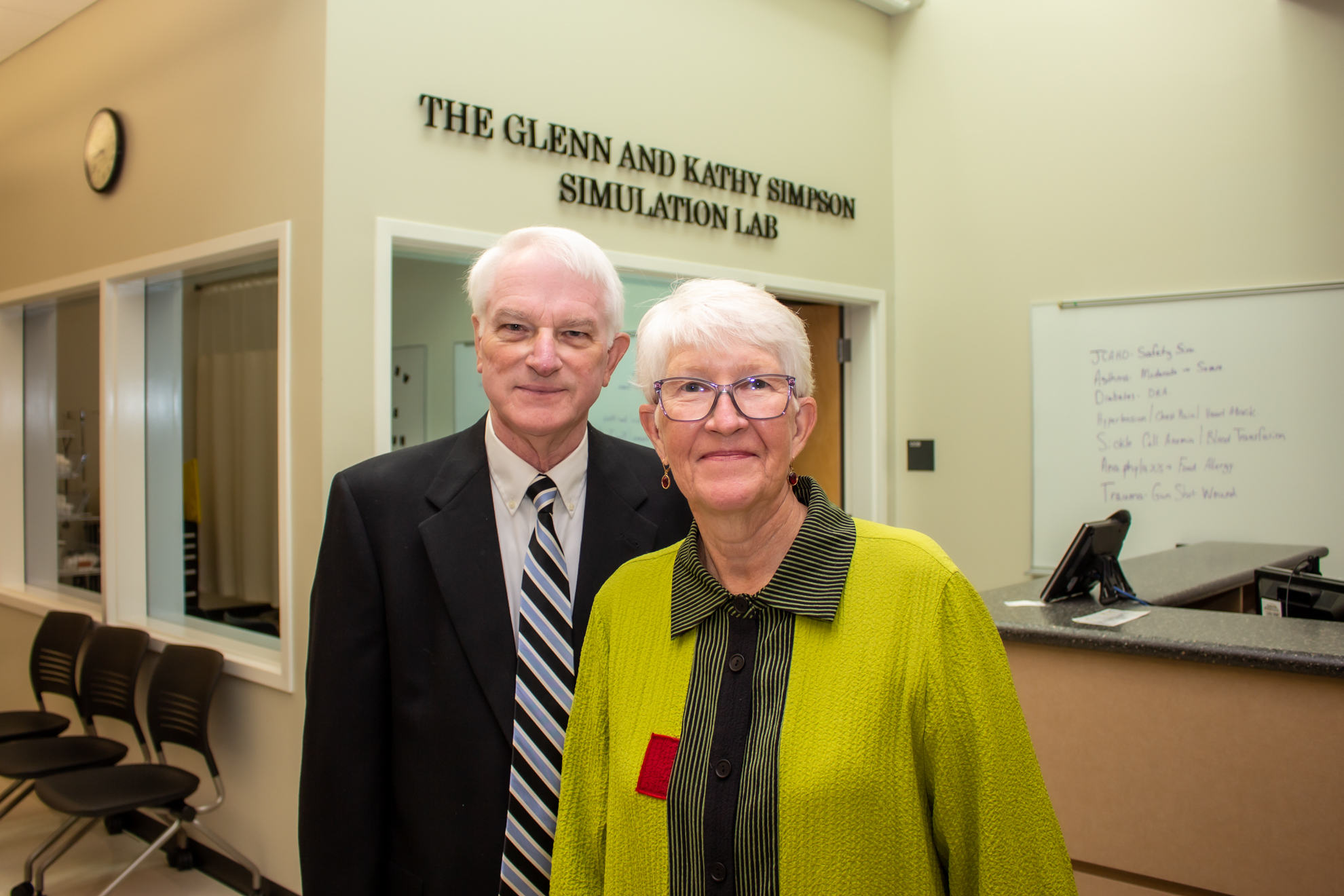 The Glenn and Kathy Simpson Nursing Simulation Lab helps Associate Degree Nursing students practice on realistic mannequins as they prepare to advance to a clinical setting. Kathy Simpson has served on the BCCC Board of Trustees since 2015, and the board elected her as its Vice Chair in 2017.

The Beaufort County Community College Foundation dedicated its nursing simulation laboratory in honor of Glenn and Kathleen Simpson on November 1. The naming acknowledges a new generous donation from the Simpson family. The Glenn and Kathy Simpson Nursing Simulation Lab helps Associate Degree Nursing students practice on realistic mannequins as they prepare to advance to a clinical setting. Kathy Simpson has served on the BCCC Board of Trustees since 2015, and the board elected her as its Vice Chair in 2017.

Kathy Simpson grew up in Washington and started her nursing career at Beaufort County Hospital before joining the Army Nurse Corps, where she served for 29 years. She is a graduate of many Army and health care courses, including the Interagency Institute for Federal Health Care Executives at George Washington University. She is a member of the Class of 2002 Johnson & Johnson/Wharton Fellows program for Nurse Executives at the Wharton School of Business at the University of Pennsylvania.

“We didn’t have simulation labs,” said Col. Kathy Simpson. “There were a lot of things I missed in nursing school because there was no way to replicate it. I’d been a nurse for three years before I heard a pericardial friction rub and heart sounds.”

She retired as Chief of Nursing Administration at Walter Reed Army Medical Center. After her military retirement, she served as Clinical Assistant Professor at the East Carolina University College of Nursing and was the Vice President for Patient Care Services at Vidant Beaufort Hospital.

Glenn Simpson is a retired Army officer and health care administrator. He is a graduate of the University of Mississippi and Central Michigan University, as well as the Interagency Institute for Federal Health Care Executives at George Washington University and the US Army Baylor Health Care Program. Upon his military retirement, he served as Director of Medical Services Division of the South Carolina Workers’ Compensation Commission, Administrator for the Department of Surgery at Walter Reed Army Medical Center and administrator at the Marion Shepard Cancer Center.

The Simpsons have two children, Glenn III (and his wife Keri) and Kenneth (and his wife Mary Katherine). They have four grandchildren: Alyson, Cooper, Caroline and Campbell.

“What our simulation lab allows us to do for our PN and ADN programs is to provide students with care that they wouldn’t be able to see in our clinical settings,” said Dr. Kent Dickerson, Director of Nursing Programs and Allied Health at BCCC. “The care ranges from everything from safe basic care to death and dying. For our students to go in and have those experiences is paramount to the success of their future, as well as our surrounding area.”

BCCC updated its naming policy this year to include classrooms and laboratories, whereas previously only buildings were eligible. For questions regarding contributions and naming rights through the BCCC Foundation, contact Serena Sullivan, VP of Institutional Advancement, at serena.sullivan@beaufortccc.edu or 252-940-6326.